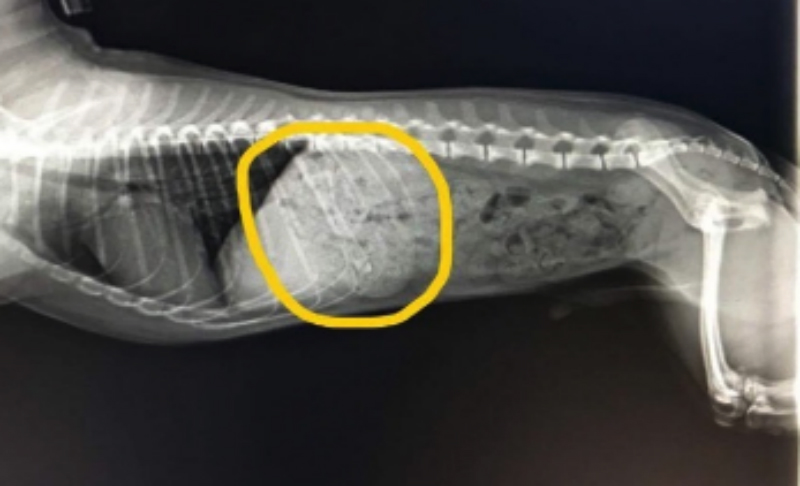 No matter the size of your furry friend, big or small, their personalities range from all different sizes. Take it from me, who’s furry friend is a one-year-old Pomeranian, weighing no more than 14 lbs, and who has the personality of a dog who could weigh close to 100lbs! Since I have brought Sami home at three months old, he never fails to surprise me each and every day with his big personality. Although each day is filled with fun and laughter thanks to him, there has been many times over the year where he has had me worried and making many calls and visits to our medical team, because his big personality has got him into some trouble.

Sami is such a small dog, but he likes to think and imagine himself as a dog who is triple his size. He likes to show off this attitude by getting into everything he knows he is not supposed. This includes the garbage, pantry and bathroom. One of Sami’s favourite activities is chewing and ripping clothing and blankets, as well as eating things he knows will not make me happy. It can be rare to see such a small dog act in these ways when it comes to ripping, chewing, and eating things he knows he is not allowed, but for Sami, he believes this is his mission in life.

My first encounter with Sami getting into things he knows he should not be into, was when I found him playing with a blow-up ball and had chewed off the rubber air stopper and eaten it. Sami was brought in here to Harbour Cities Veterinary Hospital, where he was induced vomited by using Apomorphine. Sami quickly vomited up the rubber stopper and I could relax again knowing my this foreign body was out of my pet’s system. But to my knowledge, I did not know this would happen again soon due to Sami’s mischief ways.

After many times of bringing Sami in for induced vomiting, X-rays, and medications, due to all of the ingested things like a plastic spoon and candy wrappers filled with chocolate, the biggest and scariest foreign body was when Sami ingested a cooked chicken bone. 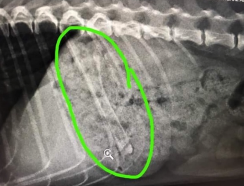 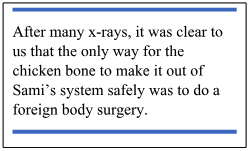 Sami was taken into the Metro Animal Emergency that night where he was operated on to remove the chicken bone and kept in for monitoring. The surgery was successful and everything went smoothly according to plan. Now that I was at ease that he would not be in great danger from this foreign body ingestion, I knew this was the turning point where Sami’s mischief behaviour had to be fixed.

I have learned ways to help prevent Sami from getting into things he should not be getting into. I have learned that when Sami is without supervision, he needs to be an area with no hazardous objects he could get into and eat. Sami has done well in a gated area with just his toys when alone. This has helped him still be able to burn off his energy, play and have fun, but without access to things he should not be getting into. Sami has been doing great with being kennel trained when it comes to human food being present, so incidents like the chicken bone ingestion would happen again. Blankets and any soft toys he could rip apart are no longer in his possession, to ensure no more foreign body surgeries.

Although Sami has had many negative encounters with foreign bodies, at the end of the day he is a puppy and chewing and wanting to eat everything are all normal behaviours. Puppies have a high energy drive and they will do anything the can to fulfill their energy. Even though he is a small Pomeranian, he never fails to make me believe he is a big dog trapped in a small dog’s body due to the amount of desire to ingest everything he can! Going forward, I have learned so much about foreign bodies and the damage they can cause. If Sami did not get the chicken bone surgically removed, he would have never been able to pass the bone smoothly and could have resulted in possible death. I am forever thankful for the amazing medical team I have here at Harbour Cities Veterinary Hospital that have been so supportive. Keeping me calm in those situations, explaining every step, and guiding me on how to make a happy and safe environment for Sami to be a puppy in.