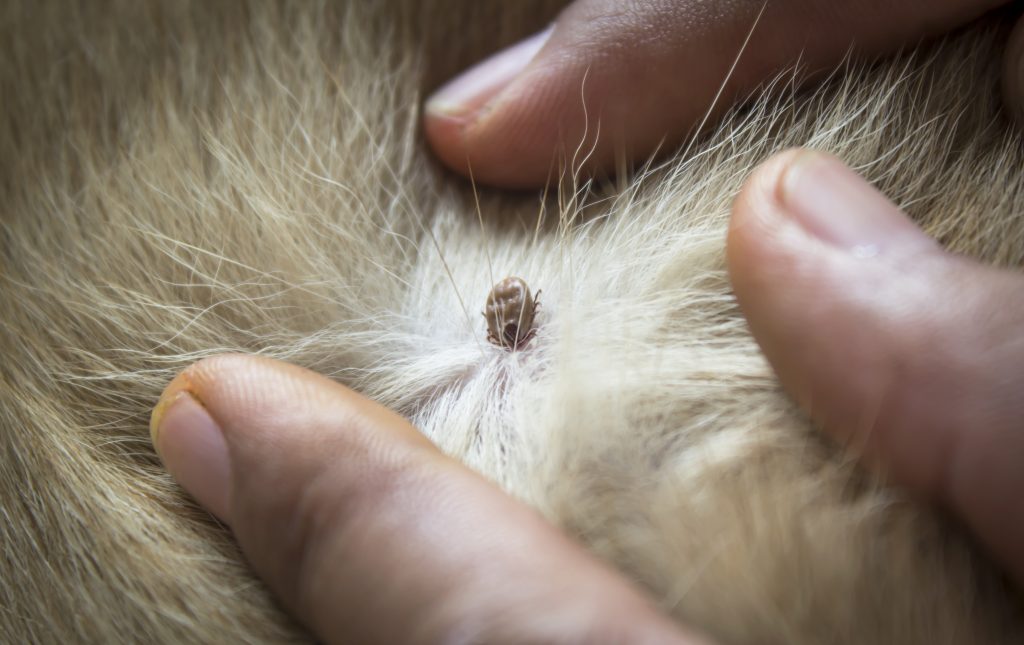 Lyme disease is an interesting organism as there are many differences between infection in humans and in dogs.  After being bitten by a tick that has transmitted Borrelia burgdorferi, 80% of humans will develop a rash and flu-like symptoms.  Joint pain often ensues with 15% of people developing neurologic abnormalities and 5% of people developing a heart rhythm disturbance. At this same point in the infection timeline, dogs have yet to develop any symptoms.  Weeks to months after infection approximately 60% of people will experience intermittent arthritis. In humans, Lyme disease presents with the potential for serious long-term illness.

In dogs, illness may never even occur and ~95% of dogs never show symptoms. When canine illness does occur, it often takes weeks or even months after exposure. In ~4% of dogs arthritis signs are noticed. Sometimes there is a fever. In dogs, heart and neurologic issues are rare. It seems the Borrelia organism is well adapted to live in the canine body without causing trouble, and most exposed dogs harbour the organism uneventfully.  This is due to constant shifting of the organism’s surface proteins.  A dog’s most serious long-term potential illness is glomerular disease. This is a type of kidney damage that occurs when the immune system is stimulated over a lengthy period of time by the presence of the infectious organism.  Screening for protein in the urine may be helpful in detecting this condition.

The deer tick, Ixodes scapularis is the tick which can carry and potentially transmit Lyme disease. The female tick lays a clump of eggs in the spring. This organism goes through a larval and nymph phase before becoming an adult tick over a 2-year cycle. Adult ticks seek larger hosts, such dogs or deer or even humans. The feeding tick is basically a blood-sucker and must keep its host’s blood from clotting in order to continue sucking, so it is able to regurgitate assorted enzymes to keep the blood flow liquid and smooth. It is during this regurgitation process that the Lyme spirochete can be brought up from the tick’s mid-gut to its mouthparts. This process requires a minimum of 24 hours, which means that if the tick is removed or killed soon after attaching, the spirochete cannot be transmitted. Tick control on the host is therefore an effective means of infection prevention.

A dog with symptoms of Lyme disease ideally should have a test to confirm this.  There is a test for antibody against the peptides on the surface of the organism called the 4DX snap test. Exposed dogs will test positive within 3-5 weeks of exposure.  This still does not distinguish active infection from simple exposure. More advanced serology testing is useful in these cases.

Treatment of Lyme disease utilizes a course of doxycycline, but Amoxicillin is another effective alternative. Eradication of the Lyme spirochete is not a reasonable expectation of treatment; the organism is simply too good at hiding. The goal instead is to bring the patient into the state where the organism is in their bodies latently but is not causing active infection.

Vaccines can prevent infection in dogs vaccinated before any exposure to Lyme spirochetes. Annual boosters continue the vaccine-based immunity.  Due to lack of severity of canine disease, the possibilities of vaccine reactions, and the past difficulty with vaccine efficacy, vaccination against the Lyme organism remains a discussion to be had with your veterinarian. The emergence of newer vaccines which offer the potential of a broader immunity to more of the surface proteins on the Lyme disease organism may represent a new weapon in the arsenal against Lyme disease.