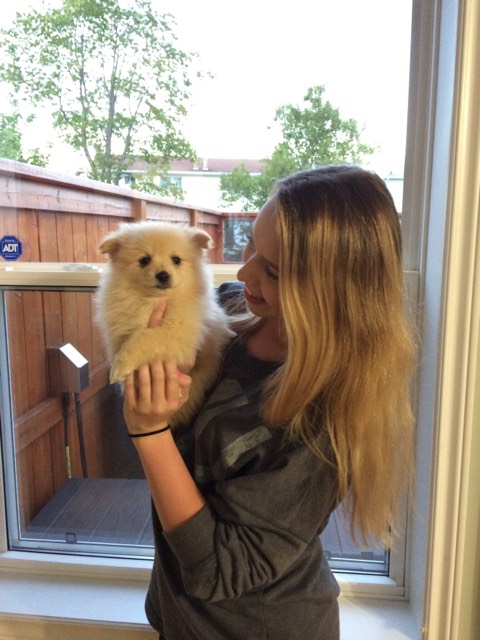 When I was young I would continuously beg my parents to let me have a dog. The answer was always “maybe one day”, and that was simply not good enough for me. I decided that 6 years old me would save up hundreds of pennies in hopes that it would be enough to afford the cost of adopting a dog one day. I remember my dad taking me to the SPCA when I turned 7 with all my pennies, allowing all my hard work in saving to finally adopt. I spotted a beautiful German Sheppard mix and instantly fell in love. My many years of saving pennies finally brought me joy as I that day adopt Bailey. Bailey was in my life for about seven months until he became very ill and we had to say goodbye. It was very hard on my family and myself to fall in love with such a great dog and then to say goodbye so soon, but I knew one day I would be ready to let myself find love in another dog as those very few months with Bailey showed me all the wonderful things dogs offer us in life.

As I continued to grow I would again continuously beg my parents to adopt another dog, but I was always told it was the wrong time. It wasn’t until I was 19 years old that my parents finally allowed me to have another dog, but it wasn’t that easy. Personally, I am a lover of big dogs, but my parents not so much. I was allowed to adopt another dog but the dog had to be a small dog. I did not know much about small dogs so it took many nights of researching different small dog breeds and asking the veterinarians and technicians for advice. In April, I decided on which breed I wanted to adopt, and that would be a Pomeranian.

I chose to adopt a Pomeranian as for the obvious reason, they are small only weighing up to 7lbs max, and for their love of interacting with children as I have young sibling who is 9. Big dogs always had a place in my heart for their activeness, as I in joy runs and hiking, so I wanted a dog that would be able to do those activates with me. One of our technicians at Harbour Cities has a Pomeranian of her own and she educated me on how active Pomeranians can be, which fit perfectly in what I was looking for in a small dog! The breeder who I adopted my Pomeranian from also informed me on the activeness of Pomeranians as well! Although Pomeranian’s are quite small, they love to run and swim!

Going into this new experience as it has been so long since I have owned a dog, I thought a lot about how I am going to train him. My number one goal in training my dog is to do so by positive reinforcement. Each day my dog, Sami, and I start the morning off but heading out to the backyard as soon as he wakes up to do his business, and once he has done it he gets a treat to know he has done well. This has really stuck with him as he knows goes to the door as soon as he wakes up knowing what he needs to do and that he will be reworded! When it is breakfast time, I will get Sami into his harness so he is ready for a morning walk, but I will bring his breakfast out with us as this helped motivate him to walk in his harness and he really enjoys the food he gets on his walk.

Although Pomeranians are small but active, there is one thing I had to do a lot of research on, being Patella Luxation – Dislocation of the Kneecap. This is a health problem in small dogs, especially Pomeranians. The patella (the kneecap) is a small bone located deep in the tendon of thigh muscles and is tough inelastic band of tissues that join the bone attachment and the muscles. When the kneecap slides out of the tendon and then slides back in, this is known as Patella Luxation. It was very important for me to have learned about this prior to my adoption as it really made me aware of how to handle my Pomeranian carefully to help avoid the kneecap from slipping in and out, and to not allow my dog to sit on the couch alone as he may jump off a high height, which increases the chances of the kneecap sliding.

I believe I made the perfect choice on choosing to adopt a Pomerania as he has become such a wonderful joy in my life. He has shown me that even though he is small, his energy level is huge, and with positive reinforcement, his training has gone perfectly. It makes me very happy to see him enjoying his new life with me and I am happy I was informed on the health issue that is very common in small dogs so I can do my very best to prevent it.