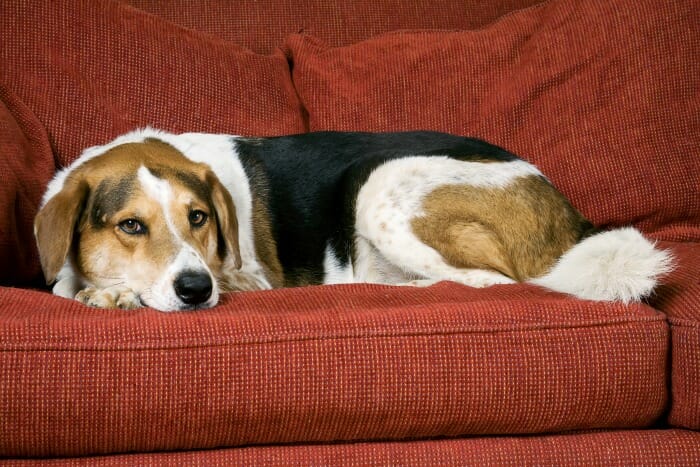 The typical canine lymphoma patient is a middle-aged dog brought to the veterinarian because one or more lumps have been found. The veterinarian rapidly determines that these lumps are actually lymph nodes and that many of the peripheral lymph nodes (those near the skin surface) are enlarged and firm. Usually, the dog has not been showing any signs of illness.

The average life expectancy for a patient with untreated lymphoma is about two months from the time of diagnosis.

Can my Dog be Cured?

Theoretically, yes, but practically speaking, no. It is best to focus on a realistic outcome that is the longest possible survival with a good quality of life. Different treatment protocols are associated with different disease-free intervals, meaning that the length of time your dog feels normal will vary depending on the protocol you choose. The disease-free interval also depends on patient factors (the type of lymphoma, concurrent disease, prior treatment, etc.). Obviously, the goal is to have as long a disease-free interval as possible.

Does my Pet Need Further Tests?

Most likely, the answer is yes because there is a great deal more to know before treatment options can be determined. We need to know about the state of the patient’s general health and if there are any medications that should not be considered. We need to know what type of lymphocytes are involved. We need to know how far the cancer has spread.

Basic blood work and a urinalysis will be needed to assess the patient’s ability to take the medications needed. Obviously, liver and kidney function will be relevant, as well as the blood calcium level (elevated calcium generally means a poorer prognosis).

If a biopsy has not been performed, it may be a good idea to do one to get the maximum information about the tumour (whether it is slow or fast-growing, what type of lymphocytes are involved, etc.) as this information can help predict the response to chemotherapy. Special staining of the sample, or even a test such as flow cytometry, is needed to distinguish the type of lymphocyte involved in the tumour. T-cell lymphoma, for example, is less responsive to medication than B-cell lymphoma. Luckily, B-cell lymphoma accounts for 75 percent of canine lymphoma.

Chemotherapy simply means therapy using medication (as opposed to using surgery or radiation). Decades of research has gone into patient comfort, minimizing side effects and maximizing response, so it is important to keep an open mind.

The median survival time for most dogs on chemotherapy for lymphoma is approximately one year, with 25 percent of dogs surviving two years.

Will chemotherapy make my dog sick?

Probably not. Nausea and infection are possibilities, but most dogs do not experience any such complications. Only 7 percent of patients require hospitalization due to the side effects of chemotherapy.

How will I know when we have achieved remission?

A patient in remission is indistinguishable from a completely cancer-free patient. The lymph nodes will go down to normal size, and if there were any signs of illness related to the cancer, these should resolve. There is approximately a 60-75 percent chance of achieving remission regardless of protocol selected. Most dogs will achieve a remission regardless of the protocol; the real difference in results between the protocols is how long that remission is likely to last. There is a blood test to check for remission, although we don’t frequently do this because normal size lymph nodes indicate remission.

How will I know when we have lost remission?

The most obvious sign will be that the lymph node enlargement has returned. This means that the cancer is now resistant to the drugs being used and new drugs must be chosen. (Seeking a second remission after the first remission has been lost is called a rescue.)

How long will my dog have quality life on chemotherapy?
This depends on what protocol you choose, and there are many. There are also many factors that influence how an individual will do relative to the average response. Important parameters to note when reviewing a protocol are:

Commonly employed protocols are 1) CHOP (80-90% complete remission rate for a median duration of 9-12 months for B-cell lymphomas, for T-cell lymphoma, approximately 70 percent will achieve remission with a six to eight-month median survival time). CHOP protocols involve drugs that have specific handling requirements, 2) single-agent doxorubicin (50%-75% complete remission rate for 4-6 months), and 3) prednisolone monotherapy (50% of dogs achieve complete or partial remission for 2-3 months). The use of prednisolone makes the tumour resistant to other agents of chemotherapy so that it will be especially difficult to get a second remission after the first remission is lost.

CHOP is an acronym for cyclophosphamide, doxorubicin HCI (hydroxydaunorubicin), vincristine (brand name Oncovin) and prednisolone. The prednisolone is typically given daily at home as a tablet, while weekly injections/oral treatments are done in the hospital. This protocol lasts for approximately 26 weeks. Single-agent doxorubicin is usually given every 3 weeks for 6 treatments. Prednisone is given daily long term as long as the clinical response is seen.